The Refugees of Race City

I am a disciple of drag racing. I love and worship the noise, cars and excitement that goes along with it. I love the smell of scorched tires, burning oil and unburned hydrocarbons wafting through the stands. I attended the races every Friday night since I got my license. The track, Race City had a half baked road course, an oval track that was way past its prime and a wobbly and rutted drag strip flanked with flaking bleachers. It was decrepit and dangerous. And I adored the place.


I never raced, but I loved nothing more than picking up my ladyfriend in my old Datsun 280ZX and heading out for a night of explosive entertainment. Those low key friday night drags (and drifting) were a release for so many people. People showed off their prized cars, talked smack and cheered on other racers. It was there I became a true gearhead and learned more about cars than the internet ever could've told me.

Race City was demolished this year to make way for a landfill. They dug up the oval and strip and tore down the bleachers but left the old tower standing as a memorial to what was. What friday nights used to be like. Poor maintenance, mismanagement and neighborhood complaints sealed the coffin for are dearly departed raceway. But unable to be squelched, the automotive community lives on at an unassuming location. 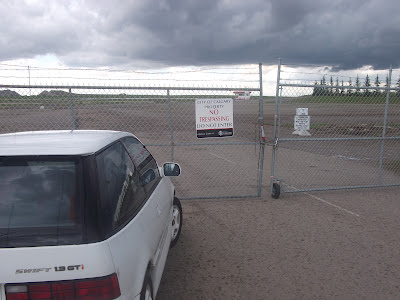 At a normal looking Tim Horton's, next to Staples, in an ugly industrial park you can find them. All of them; the refugees of Race City Every summer evening when the sun goes down they flood the place, overrun it with cars. Sometimes as many as 100. The old school guys pour over their Mustangs and Roadrunners, the JDM guys blast Skrillex, the ricers pick fights and the Volkswagon guys stick to themselves. It's just like home.

Some go there to arrange street racing, some to show off their cars but most are like me. They go out to bask in the awesome community of people that car enthusiasts are. Lovers of all disciplines of cars and racing co-exist as one hilarious and knowledgeable faction. It all just works.

And that's where I'll be until the new track is built in 2015. I'll be leaning up against my Swift drinking my hot chocolate and talking to anyone and everyone about about what i love. Cars.