Found in the Yard: Pistons Not Included 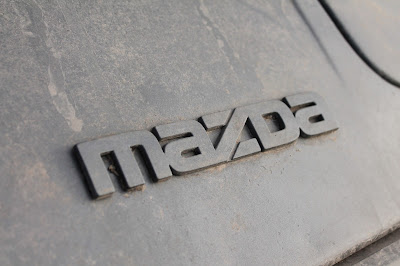 Rotaries are cool. Even though they get V8 fuel mileage, have very little torque and they burn oil like a two-stroke weed-eater, they have quite a few perks. Their compact size, revvy nature and otherworldly smoothness keep car enthusiasts gravitating towards them like sailors towards nymphs. Sadly, today's 1985 Mazda RX-7 GSL goes "hmmmmmm" no longer.


This particular RX-7 is not the top of the line GSL-SE and as such is fitted with a 4 barrel carb. The 1.1 liter engine made 100 horsepower which was okay power for the time. A comparable Nissan 300ZX which had a much larger 3 liter engine made 160 horsepower that year. Carbureted rotaries are not exactly known for their longevity so this cadaver's 151,000 miles on the odometer is rather impressive. The hood bears compression test numbers that suggest a failed seal was what took this car to the grave. Good compression numbers would've been in the neighborhood of 130-110 psi.

But when they ran, the first generation RX-7's were a joy to drive. Despite their live axle, the little Mazdas were agile cars in the corners and the model has done well in many racing series including a brief stint in Group B rally. Though it retained it's basic rotary powered two seater formula for the next generation, the shape was largely changed and new turbocharged engines became available. The RX-7 went on to become a highly advanced twin turbo sports car on par with the Corvette and Supra in later generations but many devout rotary fans still find the purity of the early models attractive.