Found in the Yard: The All American Oddball Ice cream is good. Ketchup is also good. But the two mixed together is questionable. By that logic, today's 1984 Ford Thunderbird Turbo Coupe is a ketchup/ice cream smoothie of equally questionable merit. 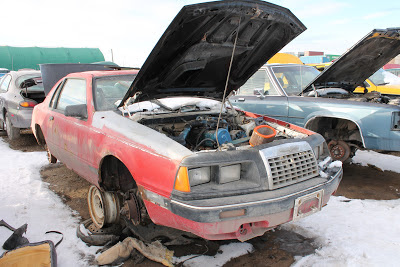 Ford's Thunderbird was a Corvette fighter in the 50's but quickly grew into a soft "personal luxury" cruiser. Some Thunderbirds were even sold as four-doors. Ford decided to somewhat reverse that shift by introducing the Thunderbird Turbo Coupe for the 1983 model year. Produced through 1988 with gradual improvements, the Turbo Coupe used a turbocharged 2.3 liter SOHC four cylinder engine that could trace its roots to the infamous Pinto. The chunky looking T-Bird was the last place people expected to find a fuel injected turbo four cylinder in 1984. 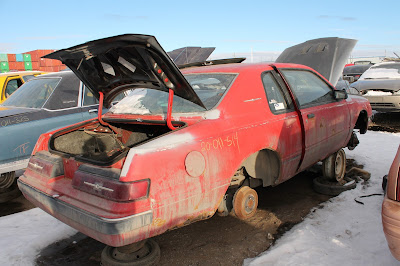 The boosted four popper was good for 145 horses and 180 lb/ft of torque. And while those numbers were hardly overwhelming for a 3,100 lb car, bear in mind that the 302 V8 made only 140 horsepower that year. The Turbo Coupe also came standard with a five speed manual, sporty seats and analog gauges with a special light to warn of "OVERBOOST."

In the end, the Turbo Coupe was more of a curiosity than a legitimate performer. Its stablemate, the Mustang SVO, was its closest competitor. However, despite being an odd combo, the Turbo Coupe delivered decent handling and a sporty driving experience in a spacious, well appointed setting for a minimal price. Ketchup and ice cream is starting to look mighty tasty.