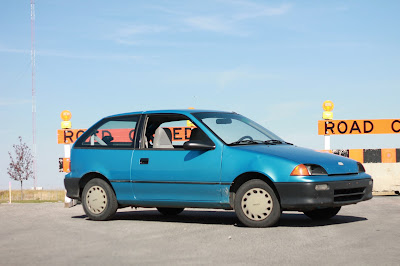 The Geo Metro is an icon of the 90's. The butt of countless jokes, the diminutive Metro wormed it's way into North American culture by virtue of its cheapness and sheer practicality. The car of choice for Ned Flanders, the Metro has dorkiness that only an AMC Pacer could match. But underneath all it's silliness, the Metro was an honest and fun sub-compact with fuel economy numbers that few modern cars can rival. 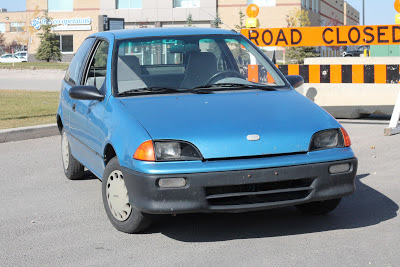 The Geo Metro was the product of a partnership between GM and Suzuki. Based on the Cultus platform, the Metro shared it's mechanical underpinnings with the Pontiac Firefly, Chevrolet Sprint and Suzuki Swift. All this mechanical sharing meant the Metro was very cheap to buy and repair.

With a manufacturer suggested retail price of only $8,580 in 1989, the Metro was one of the cheapest cars available in North America. And because of it's minimalist construction and all aluminum engine, it was also one of the lightest weighing in at only 1,650 lbs.


Mind you, this light weight construction did little to aid the Metro in a collision. Though well constructed, the Metro was dwarfed on the road by Civics and large insects. The Metro did manage a respectable 3-4 star NHTSA safety rating for the driver and passenger respectively.

The Metro was one of the best all-around economy cars of the era. It had usable rear seats, was well built and was quite fun to toss around. The skinny tires and lack of sway bars lead to rib crushingly hilarious relaxed handling. It's lilliputian one liter three cylinder was a reliable engine that delivered only 52 horsepower but also rewarded drivers with real world 45-60 MPG depending on driving habits and conditions. Even modern hybrids struggle to beat these fuel economy numbers.

In fact, a modern equivalent of the Geo Metro hardly exists. Nissan Versas look plush, overpowered and gigantic by comparison. Few new car drivers are willing to put up with the rudimentary driving experience of driving a 1,650 lb tin can. For better or worse, the world will never see a car like the Metro again.