Found in the Wild: The Porcelain Barge 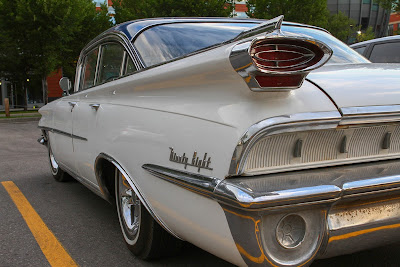 The 98 is a barometer of the American full-size car. Produced for an uninterrupted 56 years between 1940 and 1996, the Oldsmobile Delta 98 has grown and shrunk with the times. No matter what the year, the Delta 98 could be counted on to be large, comfortable and unwaveringly American. Let's check out a jet age Delta from 1959. 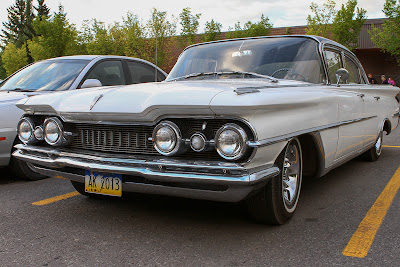 In 1959, America was prosperous and America's largest automaker (GM) was in full fighting form. Riding an unprecedented wave of success and acclaim following the hallowed 'Tri Five Chevys', GM had the industrial might, solid engineering and world class design staff to make the best cars in the world. And they did. During the golden era of GM between 1955 and 1967, they built cars that would uphold GM's reputation for decades. 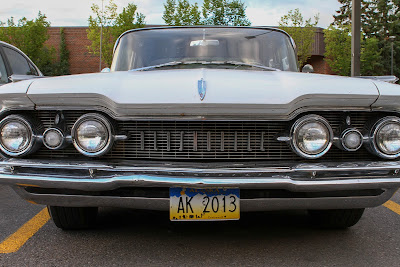 The Delta 98 is not a small car. Measuring 18.6 feet from nose to tail the 98 weighs over 2.3 tons and is nearly seven feet wide. Moving all that weight with authority requires some serious muscle. And that muscle comes in the form of a velvety smooth 394 cubic inch V8 that oozed the Delta along smartly with 435 pound feet of torque and 315 horsepower. 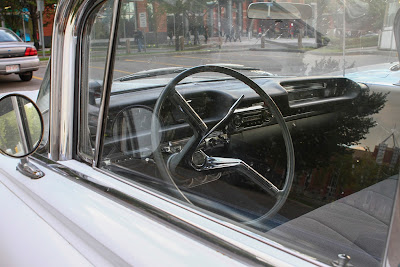 But in this case, that engine is just a tool necessary move this 4,600 pound sculpture from place to place. Every contour, badge and button on the Delta is crafted to impress. The dashboard looks more like the chrome front of a Wurlitzer juke box. Crash safety be damned, we lost something when thin bake-lite and chrome steering wheels went away. 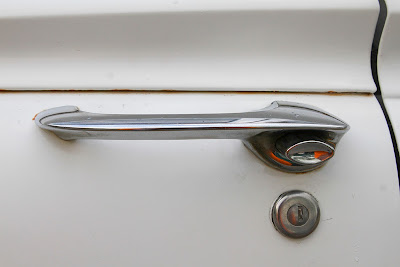 And look at that door handle! It looks like it belongs on a giant lead-lined refrigerator! One can close their eyes and imagine the heavy "ker-chunk" sound it makes as it closes. And look at the thickness of the metal. It may as well be porcelain. Cars like this can have half an inch of rust on the sheetmetal and it will still only be half way through. 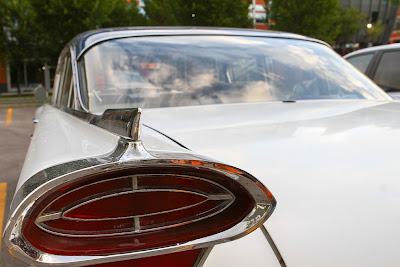 Weight was obviously not a design concern for the Delta 98. Hefty solid metal trim pieces crown every edge of the barge including these tail-lights that look like hot jet exhausts. It's remarkable that the design of the vehicle doesn't look overwrought with all the brightwork. The acres of white sheetmetal work to help that effect. 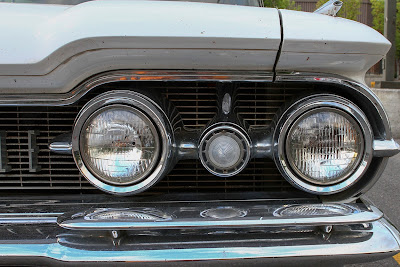 Like most American cars of the '50's, the Delta 98 was comfortable, over-engineered and futuristically styled. This one looks mostly original and will probably last another 50 years. It remains a remnant of a time when people wore hats when driving and jet travel was a luxury event to be enjoyed. Cars like this make you want to put on a nice shirt and waft down the city streets during a warm evening. 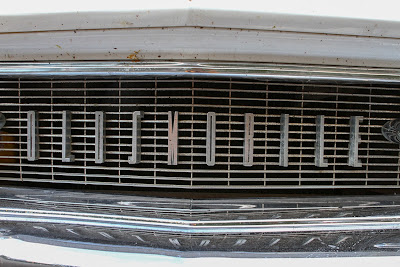 These photos were shot by Evan Buhler, a 21 year old photojournalism student at SAIT, and the lead photographer for the Mount Royal University Cougars. He always has his camera ready to go, whether he is at school, on the job, or just out and about. Besides journalistic photographs, he also has a passion for sports, travel, and landscape photography. Evan's work can be found at EvanBPhotography.com
Posted by Clayton S at 6:00 PM