When it comes to building performance cars, Texans are awesome. Carroll Shelby and John Hennessy are prime examples. However there's one man who never built a single car for the road (Didn't stop him from driving his racers on the street every now and then) but developed active aerodynamics, semi-automatic racing transmissions and countless other innovations to motorsport. His name is Jim Hall. 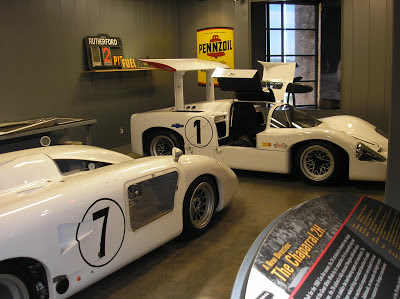 Mr. Jim Hall was a very talented individual. And a crafty one too. After racing in Formula One for three years, he teamed with Hap Sharp to create Chaparral cars in 1963. Based out of Midland Texas, Hall built cars for international races such as Le Mans and the Nurburgring 1000 km race.

Though Hall's cars did win some very famous races, his track record is not what we are discussing today. (Though a full list of Chaparral race results will be supplied in a link at the end of the article) His cars were very radical, pushing the limits of engineering and the rulebook and hence, were often banned or finished poorly due to mechanical failure. But Chaparral pioneered many concepts still utilized by racecars today and that is what makes the white Chaparrals so significant.

The 2D was the first closed cockpit Chaparral car and it was designed for endurance racing. It featured a semi-automatic three speed transmission and actually raced with a Texas license plate. It's 327 Chevy V8 produced 420 horsepower.

The 2E, pictured above, was a car full of innovation and ground breaking ideas. The 2E featured radiators mounted to pods on the side of the car just beyond the passenger compartment. This allowed a lower, more aerodynamic nose and better weight distribution than a traditional front mounted setup. But it wasn't the radiators that racers we're talking about in 1966, it was that massive and movable wing.


This was more than a common spoiler, this was a smart new way of interpreting active aerodynamics. Firstly, the wing was mounted on struts that were attached to the hubs, not the body, so the downforce went directly to the wheels without needlessly loading the suspension. Also, due to Chaparral's unique three speed semi-automatic transmission, they used the third pedal position that is usually a clutch to control the position of the wing. For cornering and braking, the wing would be angled in it's full downforce position and could be released during acceleration to reduce drag. It was and is a brilliant design. The 2E remains Jim Hall's favorite car. 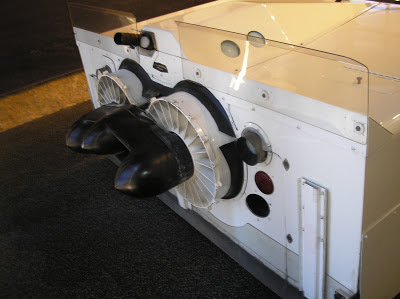 Known as the "sucker car" and the "turbo dumpster", the 2J was undoubtedly the most radical Chaparral ever built. The most dominating feature of the odd looking racer was the pair of massive fans poking out the back. Powered by a separate snowmobile engine (No I am not making this up) the fans worked with a lexan skirt surrounding the car to "suck" air out from under the car and create downforce. The car was capable of producing an astonishing 1.5 g's of lateral grip.

Powering the 1,800 lb doorstop was a healthy all-aluminum 465 cubic inch Chevy big block. The 2J took the Can Am series by storm during it's one season in 1970. The car was universally loathed by other teams. Racers were not happy with the 2J's sucker fans shooting gravel at following cars windshields like buckshot and Mclaren argued that the car would cause the demise of the Can Am series by totally dominating it!

Eventually, the SCCA agreed that the fans constituted a moveable aerodynamic device and outlawed the car from competition.

This is not a comprehensive look at the Chaparral cars, if it was it would be a very long story indeed. This is a short highlight reel of some of the cars Jim Hall built that changed and advanced racing like few minds had done before. Jim Hall built quite a few of his Chaparrals through the years and while they weren't always on the leader board, they were always in the headlines and rulebooks the year after.

Footnote: The Permian Basin Petroleum Museum has a separate wing that houses many famous Chaparral cars and a very special GT40 as well. My visit to the museum years ago was the source for the photos in this article.