Found in the Wild: The Gentleman's V12 Fezza 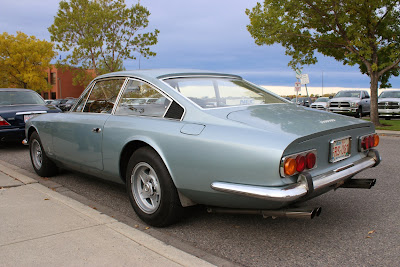 It's not often that a car is overshadowed by both its predecessor and its successor but that's just what happened to our featured Fezza. The Ferrari 365 GT 2+2 was hardly a bad car, in fact it was and is an exceptional grand touring car but that's just how good Ferrari was in the 60's and 70's. But why is this car worth hundreds of thousands less than those that come before or after it? 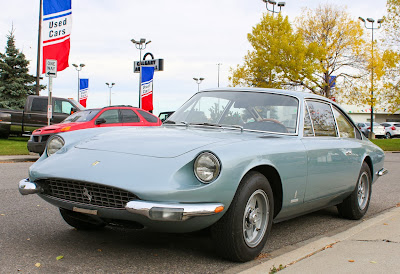 Well firstly, while it's a gorgeously styled Pininfarina darling of the '60's, it's hard to be the hot one in the family when your older sister looks like this and your younger sister looks like this. While there are many beautiful elements to the 365 GT 2+2's shape, it looks awkward in profile and has a rather gangly fish mouth. Not that I would kick it out of bed for eating crackers but it's clearly up against some stiff competition.

The car itself was built around some seriously lust inducing componentry. The 4.4 liter SOHC V12 made 320 horsepower at a shrieking 6,600 RPM. Backed by a five-speed manual (With a dogleg first gear) the luxurious Ferrari could close the gap between 0 and 60 in 7.2 seconds. This is rather impressive considering that this was the largest and most luxurious Ferrari yet.

This Ferrari was rather atypical against most Fezzas of the day. It was not a homologated road racer with six pissed off carburetors and it was not a stripped down roadster. The 2+2 was a near full-size (For Italian standards) four-seater with power steering and air conditioning. Unlike its brethren, the 2+2 was made for driving home at night while smoking a rich cigar rather than terrorizing Sebring and Sears Point. 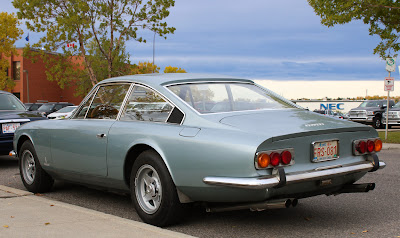 But even one of the least desirable Ferraris of the era is still a seriously drool-worthy object today. Values range between 50 and 100 thousand depending on year and condition. Hardly any of these immortal machines are street parked but this one was found outside a Ferrari/Aston Martin dealership on a crisp fall morning. A fine day for a drive.