Found in the Yard: The Many Faces of the Cultus 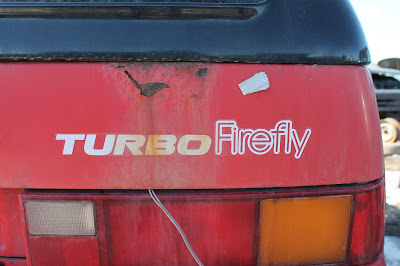 Marketed through over a dozen different model names and sold by seven different manufacturers, the Suzuki Cultus is a very worldly and versatile platform. Popularly known variants including the Suzuki Swift, Geo Metro and Chevy Sprint revolutionized the sub-compact world in the 80's and 90's. But today, we're looking at a variant that was only sold in Canada. 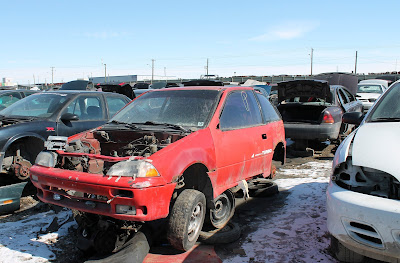 While the first generation Chevy Sprints did feature a turbo model between '86 and '88, The only country to receive the turbocharged one liter, three cylinder G10T in the rounded second generation bodystyle was Canada. The G10T used the cutest little intercooler and turbo to generate 75 horsepower as well as some truly impressive fuel economy numbers. Only sold in turbo form from '89 to '91, today's 1990 Pontiac Firefly Turbo is even rarer than the same year Swift GTi which are hardly plentiful at all. 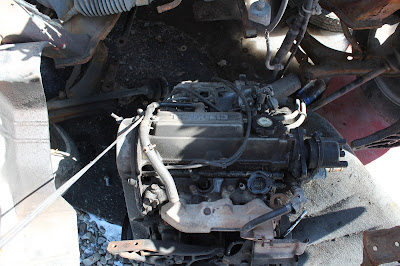 This little Firefly had been quickly stripped of it's precious turbo, intercooler, hood scoop, steering wheel, sport mirrors and fog light lens. These are rare parts and the Turbo Cultus cars have a rabid following in Canada. The odd rear spoiler was cracked or else it would likely have been snatched as well.

Someone had trouble letting this one go as it traveled nearly 240,000 miles before reaching its final destination. A pretty incredible feat for a turbocharged sub-compact in the harsh Alberta climate. These are incredibly simple cars and fixes are usually cheap and easily done at a home garage. And check out those seats! 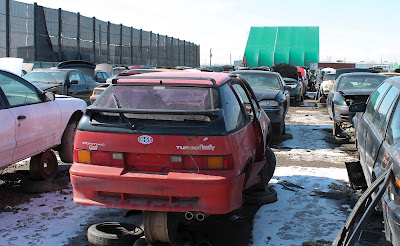 With its pint-sized dimensions, simple design, sharp handling and fun turbo noises, a Turbo Sprint of Firefly would make an interesting and quirky commuter. If only you could find one. Few were made and they seem to be getting scarcer by the minute.